APRIL 22: INTERNATIONAL DAY OF THE EARTH

SAVE TO THE PACHAMAMA, THERE IS NO OTHER REPLACEMENT 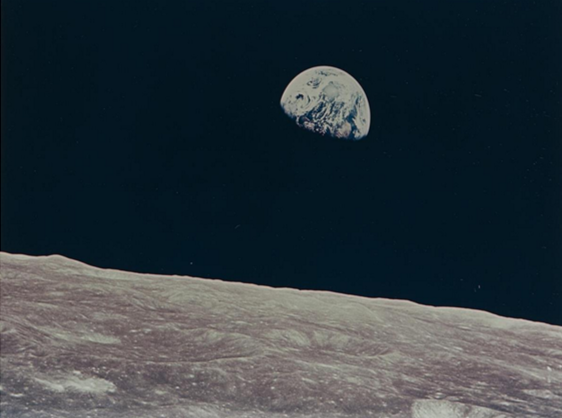 First exit of the Earth seen by human eyes, Apollo 8 (December 1968), by William Anders (born in 1933). The astronauts of the Apollo 8 mission saw the first Earth exit ever seen by human eyes during the fourth round of the spacecraft around the Moon. "It was the only color against the deep blackness of space. In short, it was beautiful and clearly delicate, "said William Anders.

This photo was taken on December 24, 1968 at 16:40 UTC, by astronaut William Anders of Mission Apollo 8, which did not land. This photo entitled Earthrise (Earthrise, in English), "inspired the contemplation of our fragile existence and our place in the cosmos" according to Life magazine.

Referring to our planet with the expression "mother earth" has gone viral, especially among environmentalists; a happy fashion that shows the intimate relationship of the human being with the planet that serves as a lodging and, above all, that provides everything necessary to perpetuate itself along with all the other species with which it shares a common destiny: to be born, to live and die on earth. There is no other spare planet to alter this truth. And yet, the human being is living as if that were possible. The daily destruction of ecosystems is a constant alarm; it is enough to reread these two news to understand the magnitude of the problem, or as Albert Einstein would say, the magnitude of human stupidity:

Colombia says goodbye to its jungles

70% of deforestation in this country is concentrated in the Amazon and, since the departure of the FARC, it increased 44%. A news team traveled to some regions and documented how illegal mining and forest fires for the sale of land is accelerating the destruction of Colombian forests.

Human advance threatens to leave thousands of species without space. Changes in land use are reducing available habitat by up to 10% per decade

Humans have needed 500 years of expansion, advance and, sometimes, progress to exterminate some 900 species of animals. The next wave of extinctions, already underway, can be almost doubled ahead. A study shows that, by 2070, changes in land use will endanger some 1,700 new species that until now have not experienced difficulties. But whether they disappear or not, will depend on the choices made by humans.

In both cases the hand of man is the one that acts with total intention to destroy the habitat of other species, knowing that it also destroys its own: THE EARTH. The felling of forests and jungles and the extinction of patio companions is alarming. It is the responsibility of human beings to prevent this from happening; In particular, people with recognized leadership who have power and transcend geographical and emotional boundaries, are responsible to assume with more determination the defense of the Earth: there is no plan B to take hold of another Earth. Fifty years are unthinkable to postpone the rescue of the Amazon, it is very long the period of two decades to stop illegal mining in the Farallones de Cali, it is not even valid to delay in five years the plan of preservation of the habitat of three species of birds Endemic to Colombia that are about to become extinct: the Nicéforo wren (Thyrophilus nicefori), the swamp wren (Cistothorus apolinari) and the Colombian paujil (Crax alberti).

The decision to act is now, tomorrow may be too late. That is why, on Earth Day, the best way to celebrate it is by acquiring the commitment to stand with those who advocate sustainable development and not promote irresponsible or unsustainable actions that threaten life on Earth; today our responsible option with Mother Earth is one: to be each one of us a pawn in the collective work of promoting harmony with nature and the planet. We all must get off the story that the land is inexhaustible; the earth as any living being has its problems, ignoring them is the quickest way to end it. On Earth Day remember where we really stand, keep in mind that everything we do has an impact on the wonderful site we occupy. And that it remains a wonder depends on each of us.

It is important to make visible the divinity of the Pachamama, which in the Andean cultures represents the Earth, which is considered a deity with which it is possible to dialogue permanently, since the indigenous people believed that it was a solicitous mother who listened and always He provided the sustenance, but he also had to be forgiven if he was insulted. Let's not break this dialogue, today the Pachamama needs us more than ever, and the only voices she wants to hear are those of the crystalline channels of the rivers or the pure air, Pachamama wants to hear the trills of the birds, the sonorous roars of the big cats, or the harmonious compass of the whales in the seas: that is, the voices of nature. And ours, saying that we do not miss our commitment to be the custodians of everything that the Earth is and contains.

Returning to the image that this article illustrates, we will have to think if we are not very close to convert the beautiful color of the earth, into another blackness dissolved in the immense and dark space that surrounds it, and the worst: without anything that moves in she.