TRIBUTE TO THE ECOLOGISTS IN THEIR DAY:

DON QUIJOTE AND HIS SHIELDS IN THE CURRENT WORLD 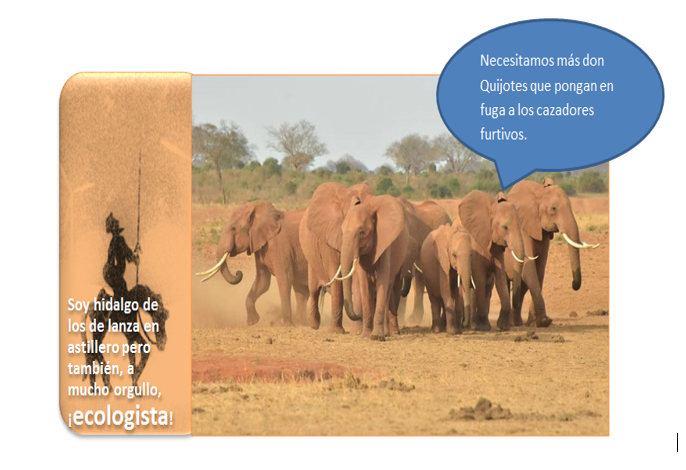 The adventures of Don Quixote seem unrepeatable in the modern world because of the differences that separate the 21st century from the 16th century: an urbanized world, technified, automated, fast, communicated, as opposed to a rural, backward, slow, incommunicado world. If a man today went out to "undo wrongs" it would be immediately the mockery in the social networks, and in a certain way nothing would happen.

However, the world continues to pose problems that are similar to those faced by people 400 years ago: poverty, marginality, intolerance, abuse of power; The clothes and the look have hardly changed. Don Quixote left in search of fantastic adventures through the barren fields of Castile, stimulated by an inexhaustible thirst for justice that led him to fight all the enemies that poverty, marginality, intolerance and a long etcetera of abuses, make possible and strong. Armored in his idealism showed all his genius making the brave defense of values ​​in which he believed. The madness that directed his actions did not happen to be the little creative reading that made of his character those who thought themselves more sensible: the nobleman alienated by reading ended up being more remembered than the idealistic fighter.

It does not stop being stimulating to ask ourselves:

In a world where the horizon of possible changes is linked to advances in science and technology, where new inventions are prolongations of the old or sophisticated debugging of technologies, there remains only one big issue with which we begin to be sensitive beings humans: the care and preservation of the Earth as the home of all species. The fatality of a destruction of all forms of life on the planet is an idea that is less and less remote and absurd. Every day there are more reasons to believe that this becomes real. Then the desire arises in many people to be effective defenders of the planet, linking to organizations defending animals, forests, rivers, seas, wetlands, etc. Who has not been moved to see the massacre of 600 elephants to tear out their fangs, who has not resisted the belief that there is a plastic island in the sea larger than France, or who has not protested the oil spills in the coasts of Mexico or in the beautiful jungles of Colombia?

The environmental issue must be the first in the concern of any citizen who wants a better future for himself and his family, or who thinks about the world that will inherit the next generations, a topic that should occupy the first place in the agenda of the rulers, and be the most sensitive issue for everyone who loves this beautiful planet. So we do not doubt that Don Quixote will assume the defense of the Earth: he will make the environmental cause his inspiration to accompany the whalers in a boat, he will be in Africa looking for the hunters of lions and elephants, he will go to the Amazon to denounce the indiscriminate felling, we will see it in the United Nations launching a discourse on inequality and inequality that is also causing the depredation of the planet, and perhaps we will also see it marching side by side with all the environmentalists of the planet to ask all the women of the world who never again wear gold rings, bracelets and earrings as a way to put a limit on mining that ends with the forests and rivers of the third world.

Everyone who loves Earth and wants to defend it, everyone who raises his voice to protest all the evils that have unleashed dehumanized industrialization and compulsive consumerism, is a squire who would honor serving Don Quixote.

The modern version of Don Quixote could not be more suggestive: an elderly environmentalist always surrounded by boys and girls willing to accompany him on his adventures to save the Earth. A voice that saves the barriers of incomprehension with its great and solidary message of love to the planet and to all the species that live in it, especially the human being.

A way to close this tribute, this micro-story that honors Don Quixote in his role as modern environmentalist:

"I will always be ready to fight the feintless scoundrel who destroys our Earth, as yesterday I defended the elephants of poachers," says Don Quixote, raising clamorous applause at the UN compound. Then, all the attendees parade downwards in front of Rocinante's bored hide exposed in a showcase.