Without plastic there will be more paradise

The Spring, also known as Adam and Eve in the earthly Paradise, 1660-1664, oil on canvas, 117 x 160 cm, Louvre Museum, Paris. Retrieved from https://es.wikipedia.org/wiki/Nicolas_Poussin

The Conference on the Human Environment, held in Stockholm (Sweden) in 1972, decreed on 5 June as "World Environment Day", a proposal hosted by the UN and led by the United Nations Environment Program ( UNEP).

A leadership that has become visible in campaigns tending to draw attention to issues that today are a growing concern: global warming, the reduction of the ozone layer, protection of endangered species, indiscriminate use of toxics chemicals in agriculture, the pollution of seas and rivers, the affectation of wetlands and forests due to uncontrolled urbanization, the destruction of the big plant lungs of the world such as tropical forests, etc ... etc. Campaigns that are only successful if the human being modifies their consumption habits, which also changes the supply of industrial products, the cleaning of processes and the reuse of waste. It is not easy to do it, because there are business interests that are difficult to remove from one day to the next; the advantage is that we, in exercising our freedom and attuned to the reality of the planet, can make the decision not to be part of the problem and instead be managers of the solution. A solution that goes through the valuation of the collective interest against the individual interest.

This year the global campaign promoted by UNEP is to combat plastic; there is dramatic evidence of the evil that is causing the seas and oceans of the world. The most aberrant and dangerous example: in the Pacific there is a large plastic spot that has three times the geographic size of France: that is 643,801 km² X 3 which is equal to 1,931,403 km². If the Pacific Ocean has an area of ​​161.8 million km², it means that this island of plastic represents 1.17% of this ocean.

Just take a look at our domestic environment to realize what the plastic means in everyday life: it literally envelops us. From the moment we get up until we go to bed we are in contact with the plastic, in its most varied presentations. And those presentations, which are more abundant and easy to replace, are plastic bags and single-use plastic utensils (plates, glasses, cutlery, or cigarettes). The decision to use a cloth bag or fique not to use plastic bags when we go to the super, or to end the habit of drinking sodas with cigarette, is an affirmative action that will thank the planet. Is it worth twenty minutes to use a cigarette that is manufactured in an hour and takes a hundred years to decompose? Of course not. In the following table we can see what it means to use plastic: 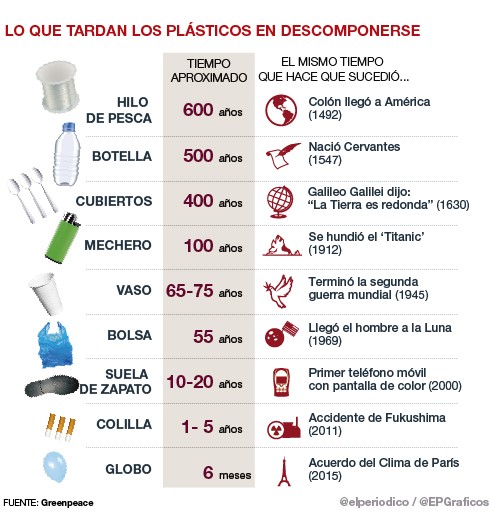 The next time you are celebrating your son's or daughter's birthday, say the fifth, and want to use plastic cups to serve the soda, stop to think that those glasses that you will throw away after three hours of partying, they will only break down in 65 years, just when your son or daughter, surrounded by grandchildren, is celebrating the seventieth birthday and you are not partying any longer.

Today the invitation is to modify our way of life: we reject the disposable plastic, and we turn creative to replace the plastic. Fun works the same with non-disposable dinnerware. But the Pacific Ocean does not work the same way with its plastic island that will continue to deteriorate the habitat of multiple species.